You are here: Home1 / John’s background

I was born in Palo Alto, California where I was raised for 19 years. My father was a scientist and my mother was a homemaker. I was able to travel a bit when I was young because my older brother was a diplomat. I was able to visit him and his family in Venezuela when I was 12. I was able to go to Angle Falls and stay in the rain forest while I was there. I also visited Curacao Island, Porto Rica, and Panama where we could not leave the airport as we landed during the revolution.

At 15, I went to live with my brother and his family in Tokyo Japan. I was to be there for one year but my trip was cut short. I went to school at Nichimachi International school in Tokyo. My nephews and niece and I had a great time. One great memory was going to Yokahama every week with my oldest nephews to Boy Scouts on the train. We were 11, 13, and 15, and traveling by ourselves was no problem. I do not think I would send my 11-year-old daughter out by herself now.

I moved to Oregon in 1971 to go to college at Oregon State University. And yes that does make me a Beaver! I started to school in Geological Oceanography but switched majors and graduated with dual degrees in Animal Science/Pre-Vet Medicine and Business Management. I have lived in the northwest since 1971 in both Oregon and Seattle, Washington.

I have many interests and concerns and I believe in contributing to not only my family but to my community and the world. Life is all about balancing and balancing my interests with work, school, and my family is always an issue. That is one reason I put together this web site so that I can have one place to keep track of all the things I am involved with.

I have a complete genealogical web site. Certainly one of my key projects. I now have close to 11,000 people in my database. Genealogy has also helped my become interested in history.

I have wanted my own winery or vineyard since I was in my early 20’s. I became interested in wine in college when a group of us created a wine tasting club that met regularly. I learned to appreciate the art and science of wine and dabbled in making wine during that time. Later, I had some of my own vines and made my own wine. Now that was fun. I also volunteered at a winery in Seattle working crush and again learned a tremendous amount about wine. I still dream about owning my own vineyard some day.

I love photography and recently traded in my OM 1 that I got in college for a more automated camera with the lens and features that I had wanted for years. Lucky for me, the OM 1 had excellent trade in value. There are a few photos on the site that I have taken and at some point there will be far more as examples of my work and my interests.

My primary mode of exercise and something I love to do. I walk with my daughter Kinnera and extensively walk at Kah-Nee-Ta, the resort at which I worked when this was last updated.  Kah-Nee-Ta is no longer in operation. Very sad.

Time with my family

This is my major pastime. All of my recreation time is invested with my family.

I love to read for the challenge of learning new things as well as I love a great story.  Reading is also the gateway to knowledge and is one of the prime ways to break out of the world of complacency.

I have a project mentality. Once I start a project, I like to work it through. I often have felt that I would have made an excellent builder as I love the process and outcome of construction. This is the same sense of fulfillment I get when making wine or creating a web site. It is simply fun.

Hazel and I made up our minds to adopt during the Christmas holiday in 1999. We had been exploring adoption for over 7 years but had not made the decision to move ahead. We had taken the state adoption classes and visited adoption agencies. David had been asking for a little sister for that whole 7 years.

A decision like adoption is a big decision both financially and as a change for the family. I also had to be comfortable starting a new family at 48. Once we made the decision, and that decision was amazingly easy to make, we started to explore the culture from which we wanted to adopt. As a first step, we chose an adoption agency. Plan Loving Adoptions Now was the agency we choose and did so for several reasons.

We had close friends that had adopted through Plan and had gone to fundraisers for Plan and felt they were an outstanding agency.

Second, Plan is close to us and we had met with them and felt very comfortable with them. We trusted them.

They had programs in the countries we were interested in and had 25 years of experience and dedication to adoption.

The director and a group of three other families had started Plan over 26 years earlier and had an extraordinary passion for uniting children with loving families.

As a second step, we explored the culture from which we wanted to adopt. We felt very strongly that we wanted to adopt from a culture in which we were interested. We believe that to acculturate a child in their native culture, you will need to be interested in that culture. This was a personal decision but we narrowed it down to China and India.

We decided that we wanted to adopt from India and we were fortunate that Plan has a long history working with India. We chose India for several reasons, one of those reasons was that we had friends who worked with me from India and I felt very comfortable with them and the culture.

In the end, if we could afford to adopt more children, we would. It is a very exciting and worthwhile process. We are going to be the lucky ones. Being able to raise a little girl is something we have wanted to do for years. I would highly recommend working with an approved adoption agency if you are looking to adopt. Do not go it on your own, you will add to the pain of the process significantly. Sadly, Plan Loving Adoptions is now closed.

“Education is the process of narrowing the gap that exists in all of us between what we are and what we can become.” Earl Nightingale

I am a lifelong learner and participate in our education system in our town. My graduate work was driven by my desire for the intellectual stimulation it brings and to become a professional dedicated to the development of high performing adults. In fact, I am working on my doctorate right now and continue to pursue my passion for education. I completed my doctorate in education in 2015.

Advocacy for Understanding of Learning Disabilities

I am dyslexic and learning has always been a struggle for me. This may be why I have such a strong passion for education. I understand when others struggle with reading and other disciplines.

There are benefits to every problem and I have found that being dyslexic has forced me to become a very good listener. One thing I never did in college was to skip class. I always needed to be there for the lectures. There are also things that I just can not do. Languages of any sort are difficult for me. Memorization is very difficult. I am extraordinarily good conceptually, far better than most, but the details just do not fall into place. Pooh says it all on spelling. 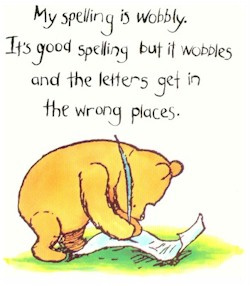 We are very fortunate to live in a democratic society. I do not take this lightly. I often think about what democracy means to me. I believe it means far more than most people realize. The bottom line to me is that we have options available to us guaranteed by law. We have options to hold beliefs, to behave within the law, to make lawful choices that will take us where we will in this life. The key is options. I believe any movement that seeks to limit options, seeks to take away our democracy.

The beauty of a democracy is that we can believe whatever we want to as long as we do not impose our beliefs on others. This is true freedom. Imposing beliefs involves forcing others to act within our template of beliefs.  I am becoming concerned that there are many in our society that would like to eliminate opposing points of view. This is being done by the attempt to silence the working class by eliminating union political contributions, creating laws to limit political dialogue, and generally doing whatever it takes to destroy the opposition. I see it in many facets of our political system. The trend to destroy the opposition through outright lies and deceit is very disturbing. I see Deception, Distortion, and Distraction as the new tools of propaganda for the neo-conservatives.  It seems that the right believes that the end justifies the means. This is absolutely contrary to the democratic process where the end is justified by the process. I do not relish living in a right-wing dictatorship. In the ten years since I wrote this, our nation is absolutely in a constitutional crisis, with the right-wing working to establish a fascist authoritarian state.

I understand that political campaigns are zero-sum games where if you can take one vote from your opponent, you gain one point. There is no second place role in a campaign. But this also does not warrant the personal intrusion that is now the norm in political debate. The process is undermining our democracy. Winning is becoming more important than civil debate.

Democracy depends on open debate and opposing points of view. It thrives on plurality. The more differences we have, the richer our culture becomes. I often wonder how many people would attend a football game when only one team showed up. Any effort to dominate and exclude begins to feel like a dictatorship of ideology, and this is something I oppose. A dictatorship, no matter the form, is in direct opposition to democracy. Where a dictatorship is the rule of the minority over the majority, democracy is where we are blessed by the rule of the majority with strong protection of the minority.

Open political debate is the foundation of our democracy. Politics involves the peaceful resolution of differences. The alternate is war. When the minority forces beliefs on the majority, this is often not a peaceful process. Let’s work together to protect our democracy.

The protection of the future of the earth for our children and the generations to come is a critical priority for the world. Coupled closely with this is worldwide public health which has a profound impact on our environment and the security of the world and our nation. Somehow we need to figure out how to preserve our world for the generations to come.

One of my major concerns is that in an attempt to maximize money for our society and citizens, we will be all too willing to sacrifice the environment. The United States needs to take a leading world role in the elimination of environmental destruction. With the power of mining, oil, and other business interests dedicated to maximizing profit for shareholders, I have great concerns about the future of our resources. I am amused by the conservative position that businesses will act in the best interest of all if given financial incentives. Very few will unless there are strong laws backed by enforcement driving the behavior. Any other assumption is simply naive and differs from the history of humanity.